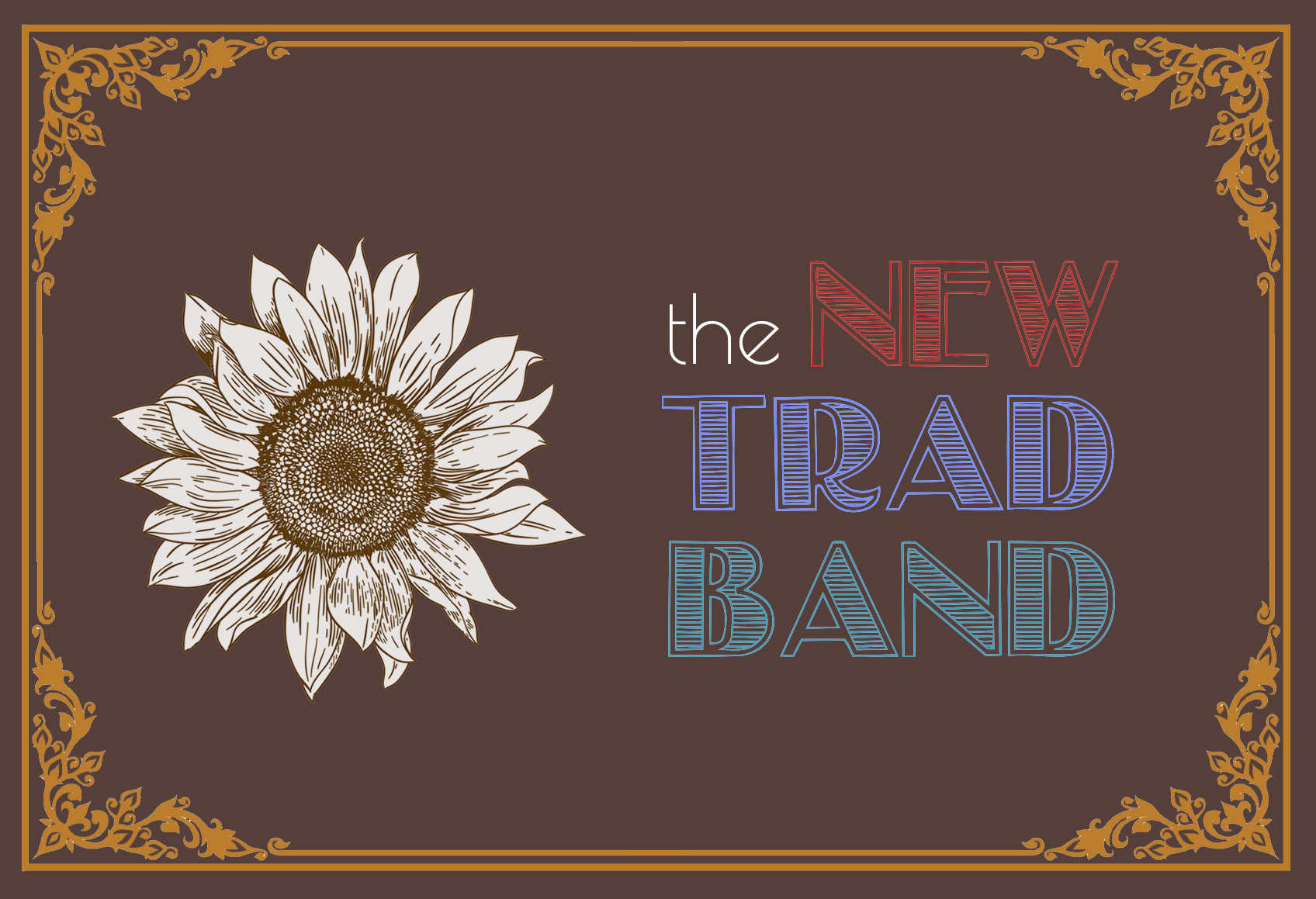 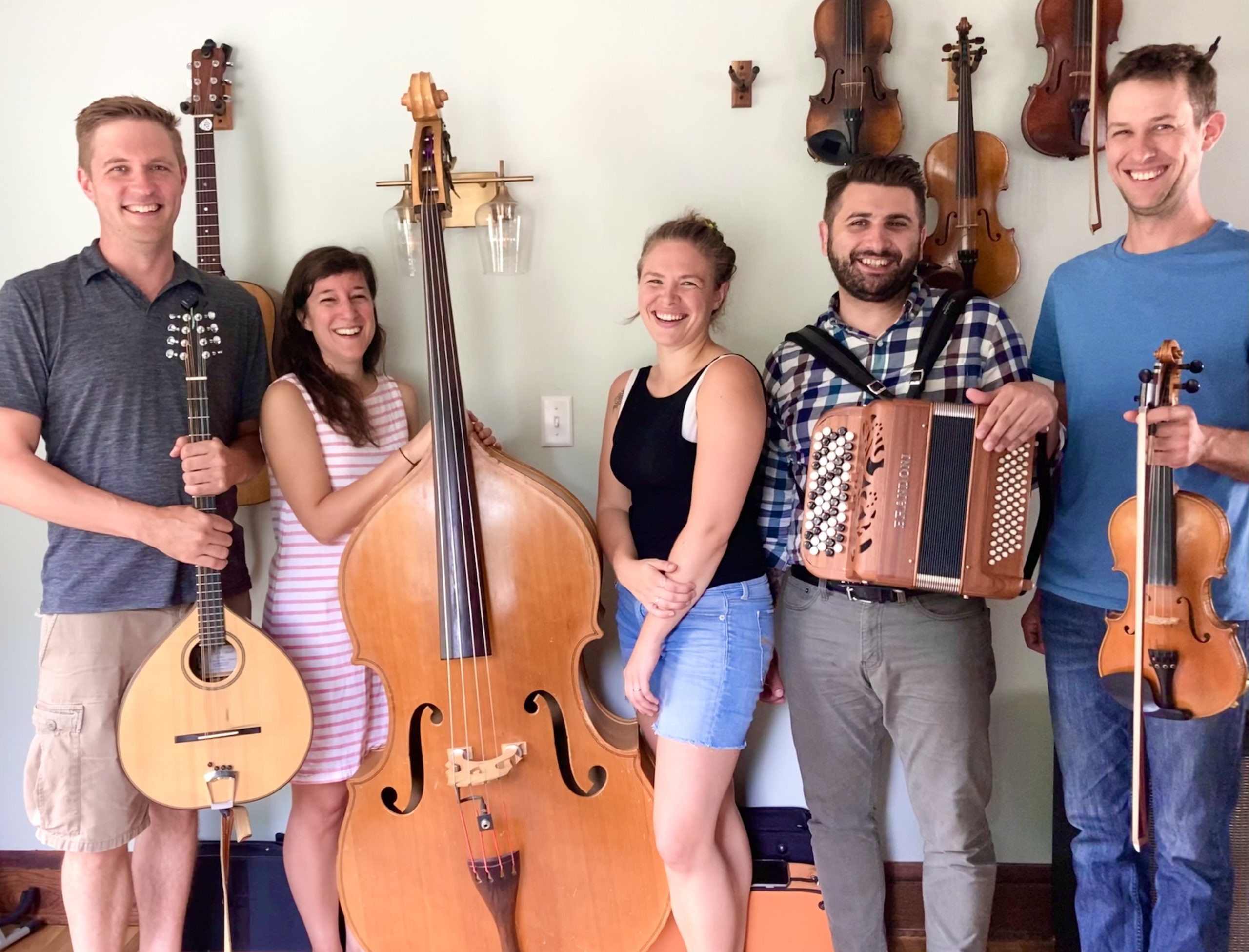 Multi-genre step dancer Danielle Enblom has gathered some of the region's top musicians from the Irish, American old-time, and jazz worlds for an impactful set of tunes, songs, and steps from Ireland and North America. Danielle is an Irish step dancer, sean-nós dancer, fiddler, and Ethnochoreologist whose dancing is informed by deep embodied knowledge, pathbreaking research, and most recently connections to Ireland, Quebec, and the Métis Nation. AJ Srubas and Patrick Harrison bring two types of American to the mix with melodies on fiddle and accordion. Though AJ started out as an Irish fiddler, in recent years he has made his mark in the old-time and bluegrass scenes as a solo fiddler and with Steam Machine, a new and celebrated gem in the American traditional music scene. On the accordion, Patrick Harrison’s old-time jazz stylings are a favorite for Lindy Hoppers from New Orleans to NYC. Locally you can hear Patrick playing in Klezmer bands, orchestra halls, and with the Twin Cities’ favorite old-time jazz band, Patty and the Buttons. Rounding out the rhythm section are Rina Rossi and Brian Miller with a little bit of Irish, a little bit of old-time, and a little bit of Midwest. Rina, who also plays with national old-time favorite, Steam Machine, is a multi-instrumentalist, clogger, and square dance caller extraordinaire. And finally, on guitar and vocals, Brian Miller whose intricate yet driving guitar style has made him one of the most sought after accompanists in the North American Irish music scene. Brian’s research into Minnesota and midwest music brings fascinating depth to the projects he’s involved in. Together this mix of performers create a quintet that you won’t want to miss. Join them for this unique blast of tunes, steps, and songs from the Midwest, Ireland and beyond.

AJ is an award winning fiddler and multi-instrumentalist based in Minneapolis and touring regionally and nationally with various musical projects. AJ grew up in a musical Wisconsin household, grandson to a church organist. He latched on to the fiddle at age 10 after experimenting with the many instruments around his home. His love for the instrument led to an interest in various fiddle styles. Initially an Irish player, he quickly discovered old-time music when his brother took up banjo. Soon after, he met the great Wisconsin fiddler Chirps Smith who introduced him to the lesser known old-time repertoire of the Midwest.

Other influences on his old-time playing include Iowa fiddlers Dwight Lamb and Al Murphy who in turn played with Missouri fiddlers Cyril Stinnett, Lyman Enloe, and Gene Goforth, and of course the ultimate fiddler’s fiddler, Kenny Baker. As an old-time player, AJ has won ribbons three times in both fiddle and band competitions at the Appalachian Stringband Festival in Clifftop, West Virginia, one the country’s premier old-time events. Learn more.

Rina and her three best friends all took up the bass in sixth grade orchestra. Though she listened to mostly bluegrass and old-time music at home, she enjoyed being in the bass section and continued playing classically for the next six years. She then moved to Minnesota where she learned to clog, call square dances, and play fiddle and guitar. As hard as she tried not to haul it around, her bass playing abilities gradually became known and she's picked it back up again for a number of projects, including this one. Besides BU&P, Rina plays guitar with the old-time/bluegrass project Steam Machine, bass with Mpls country band Hello Heartache, and has laid down the low-end on various other projects, including an album of original songs composed in response to femicide murder ballads called To Spill My Husbands Blood. She has also led workshops from flatfooting to square dance calling at places such as the Augusta Heritage Center, Fiddle Tunes, Folklore Village, Rocky Mountain Old-Time Music Festival, and many Minnesota Bluegrass and Old-Time Music Association festivals.

Brian Miller’s intricate yet driving guitar style has made him one of the most sought after accompanists in the North American Irish music scene. Esteemed Irish music critic Earle Hitchner writes: “The backing of Miller on guitar flexes not just muscle but a fully complementary style.” Also a renowned traditional singer, he is the founder of the Traditional Singers Club of the Twin Cities. Brian is also a master of the bouzouki, an instrument that has been adopted into the Irish tradition in recent decades. He has performed across North America and in Ireland with various groups including Bua, Chulrua, The Máirtín de Cógáin Project and the Two Tap Trio. He has been featured on MPR’s All Things Considered, CBC Radio’s Canada Live, and Ireland’s RTE television, RTE radio and TG4 television. He has been a guest lecturer on the Irish song tradition at University College Cork (Ireland) and he teaches at the St. Paul-based Center for Irish Music. Brian has earned considerable recognition for his work with the Irish-influenced music of Midwestern lumberjacks including the Folk and Traditional Arts Grant and two Artist Initiative grants from the Minnesota State Arts Board. He was also a 2014 recipient of the Parsons Fund Award from the American Folklife Center at the Library of Congress. Learn more.

Danielle Enblom is a Minneapolis-based step dancer, fiddler, and ethnochoreologist (dance anthropologist). She specializes in the old styles of dance in Ireland and their relationship to early European dances and regional styles of dance in North America. Danielle's depth of experience and knowledge in the Irish traditions, her connections to a number of North American dance forms, and her history in other movement modalities such as ballet, Alexander technique, and modern dance, and her family heritage in the Métis and Quebecois traditions bring a unique and fresh perspective to the world of traditional step dance and fiddling.

Patrick Harison is a young American button accordionist adept in a wide variety of settings and genres. He currently resides in Minneapolis, MN performing in a diverse array of projects including Patty and The Buttons, Jack Klatt and The Cat Swingers, The Cactus Blossoms, Eisner's Klezmorim and many others. Patrick is also active as an orchestral soloist playing both classical and pops programs with top orchestras across the United States under the baton of luminaries such as Doc Severinsen and Sarah Hicks. When not performing, he is an in demand composer, session musician, educator and arranger. Learn More.